Dementia, or a condition that can include loss of memory, language, problem-solving, and other thinking abilities, affects around 55 million people in the world. And while dementia can occur because of factors that are completely out of our control—like our age or our genetics—our lifestyle can play a role in both the development and the management of this devastating condition in many cases.

Generally speaking, including physical activity in your day, following principles of the MIND diet, and getting adequate quality sleep may all play a role in keeping your brain sharp. Yet, while most of us are in tune with the concept of eating nutritious foods to fuel our brains, we may neglect the importance of selecting the right drinks to help keep our cognitive health in check too.

Read on for the five best drinks for dementia, each of which is evidence-based and can have amazing effects on your brain health in a natural way. Read on, and for more on how to eat healthy, don’t miss The #1 Best Juice to Drink Every Day, Says Science.

There are many varieties of tea that make for a cozy drink. But unlike herbal teas, true teas (teas that come from the Camellia sinensis evergreen), have been shown to support brain health in impressive ways. The five types of true tea—black, green, oolong, dark, and white—contain naturally occurring compounds with antioxidant properties called flavonoids as well as the L-theanine amino acid.

According to data presented at the Sixth International Scientific Symposium on Tea and Human Health, drinking more true tea may offer cognitive function support. There is evidence suggesting that drinking green tea intake might reduce the risk of dementia, Alzheimer’s disease, and cognitive impairment.

According to a study published in Translational Psychologytea drinkers are 16% less likely to develop dementia compared with non-drinkers.

Since studies indicate that dehydration can accelerate cognitive decline in people with dementia, maintaining proper hydration is incredibly important for those suffering from this cognitive condition. Older adults are more susceptible to dehydration thanks to their diminished sensitization of thirst. To help keep hydration at bay, Vitapod Hydra + Blueberry Pomegranate provides important electrolytes to help maintain fluid balance. And since it is made with natural flavors and colors from sources such as beet juice and erythritol, it offers a satisfying taste that people who don’t love water may be happier to sip on.

Finally, this drink contains vitamins A, C, D, E, folic acid, calcium, magnesium, and potassium, plus flavonoids from decaffeinated green tea extract. Since green tea contains compounds that play a role in dementia risk reduction, this delicious combo can be a great addition for those who are suffering from dementia.

There are plenty of fruity drink options out there. But many drinks that appear to be healthy may be loaded with added sugars, which won’t do wonders for your brain health.6254a4d1642c605c54bf1cab17d50f1e

Choosing 100% orange juice instead of fruit-flavored drinks with added sugars can give your body a boost of brain health-supporting nutrients, including flavonoids, vitamin C, thiamin, and vitamin B6.

Data shows that healthy older adults who drank 100% OJ scored better on combined tests for global cognitive function vs. a control group. And in another study, higher intake of flavonoids found predominantly in citrus was associated with a 36% reduced odds for subjective cognitive decline. Intake of oranges, grapefruit, orange juice, and grapefruit juice was associated with lower odds of subjective cognitive decline as well.

Sure, sipping on a bubbly soda can hit the spot on a warm summer day. But including sugary beverages like soda in your diet may not be the best move if you are trying to support your brain health, as higher intake of sugary beverages is associated with markers of preclinical Alzheimer’s disease.

Think sticking to diet soda is a better bet? Think again. Other data shows that artificially sweetened soft drink consumption was associated with a higher risk of dementia. Instead, switch to low-sugar sodas or sparkling water to quench your thirst. 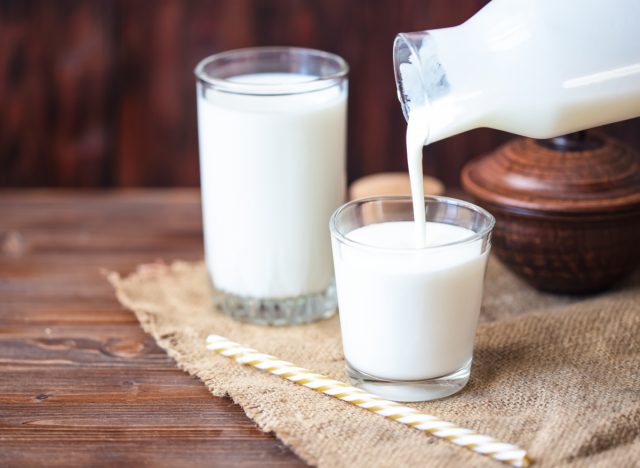 Kefir is a fermented dairy drink that is loaded with live and active cultures. Some data shows that kefir consumption may help improve cognitive deficits, thanks to the live cultures playing a positive role in systemic inflammation, oxidative stress, and blood cell damage.

Lauren Manaker is an award-winning registered dietitian, book author, and recipe developer who has been in practice for almost 20 years. Read more