Two Palestinians were killed in separate clashes with Israeli forces operating in the West Bank in the early hours of Thursday.

Clashes broke out in Ya’abad in the northern West Bank as troops demolished the home of terrorist Diaa Hamarsheh, who killed five people in Bnei Brak in March.

Three Palestinians were critically injured in firefights with the military. One of the three was later pronounced dead and was identified as Bilal Kabha, 24.

The military said in a statement that “hundreds of rioters threw stones, set fire to tires and threw Molotov cocktails and explosives at the forces.”

The IDF said troops responded with crowd dispersal methods and that when gunmen fired at troops, officers responded with gunfire. The military said “a hit was detected” by Israeli forces.

There were no injuries to Israeli troops.

The military said that Hamarsheh’s father was arrested during the operation and was taken for questioning by security services.

Palestinians inspect the damage to the house of Bnei Brak terrorist Diaa Hamarsheh that was demolished by Israeli troops in the West Bank village of Ya’bad, June 2, 2022 (AP Photo/Majdi Mohammed)

In addition to the operation in Ya’abad, there were clashes between Palestinians and IDF troops in the Dheisheh refugee camp, near the West Bank city of Bethlehem.

The soldiers entered the refugee camp to arrest a man suspected of throwing an explosive device at troops during an operation on Sunday, lightly injuring an undercover Border Police officer.

Clash broke out during the arrest raid and one Palestinian was killed. He was identified as Ayman Muhaisen, 29.

“During the operation, suspects hurled explosives and threw stones at the forces, who responded with gunfire. Hits were identified,” the IDF said.

Elsewhere in the West Bank, troops detained seven Palestinians over suspected involvement in terror activities, totaling nine arrests overnight. In Azzun, during the arrest of a suspect, troops opened fire toward a Palestinian who hurled a Molotov cocktail toward them, the IDF said.

Hamarsheh, 27, killed four civilians in the central ultra-Orthodox city of Bnei Brak on March 29 — Avishai Yehezkel, 29, who was protecting his baby from gunfire; Ya’akov Shalom, 36; and Ukrainian nationals Victor Sorokopot, 38, and Dimitri Mitrik, 23.

Hamarsheh was then killed in a shootout with police officers, one of whom — Amir Khoury, 32 — was his fifth victim. 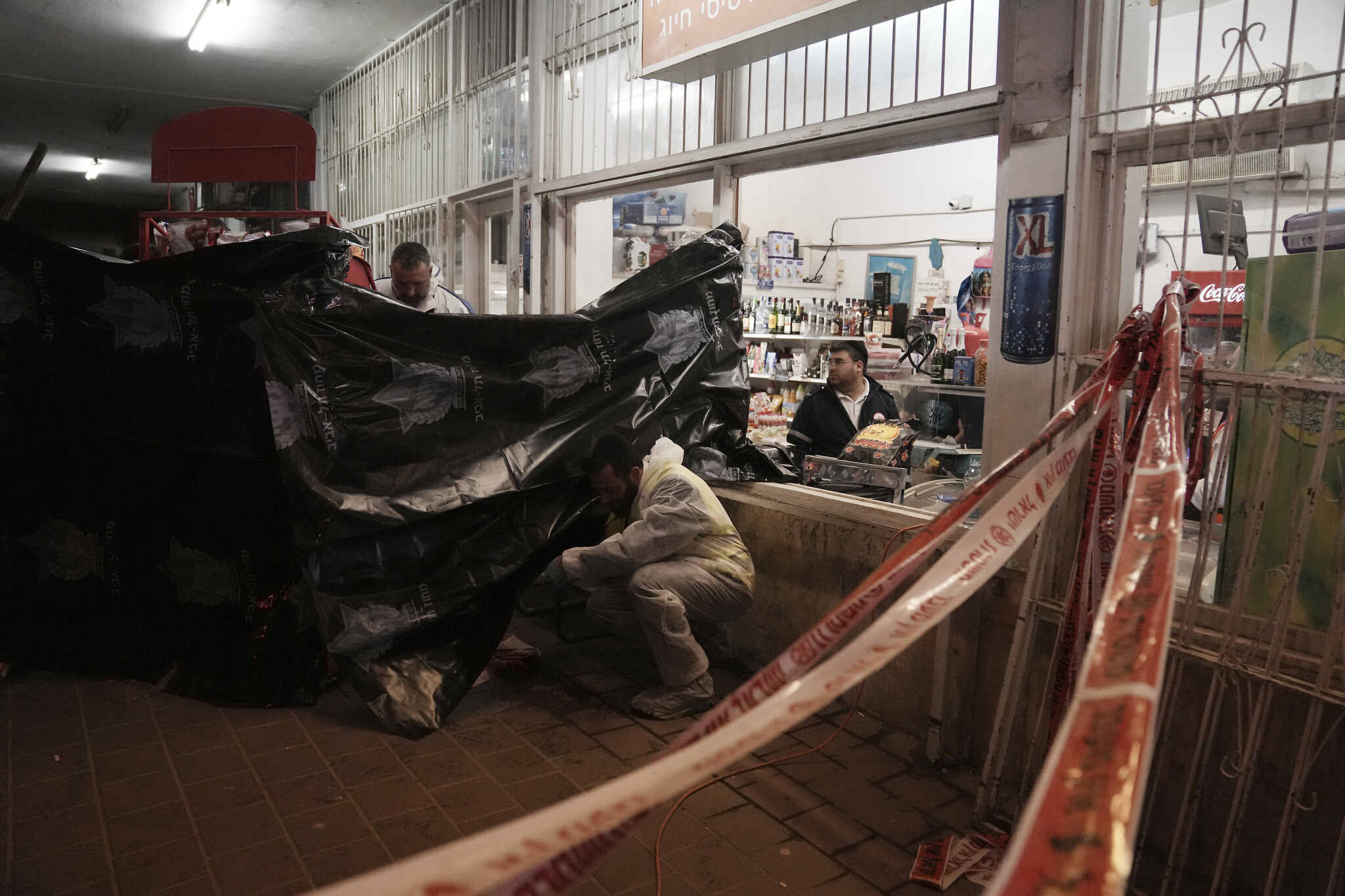 The military initiated the process of razing Hamarsheh’s home the day after the attack and issued the demolition order last month.

The shooting came at the start of a wave of terror attacks in Israeli cities that claimed the lives of 19 people. The military has stepped up its West Bank activities in an attempt to crack down on the spiraling violence.

The ensuing raids sparked clashes that left at least 30 Palestinians dead since mid-March.

Many were gunmen involved in firefights with Israeli soldiers or who took part in violent clashes. Others were apparently uninvolved bystanders, such as Al Jazeera journalist Shireen Abu Akleh. The veteran correspondent was killed last month under disputed circumstances in Jenin during a gun battle between Israeli soldiers and Palestinian gunmen.. 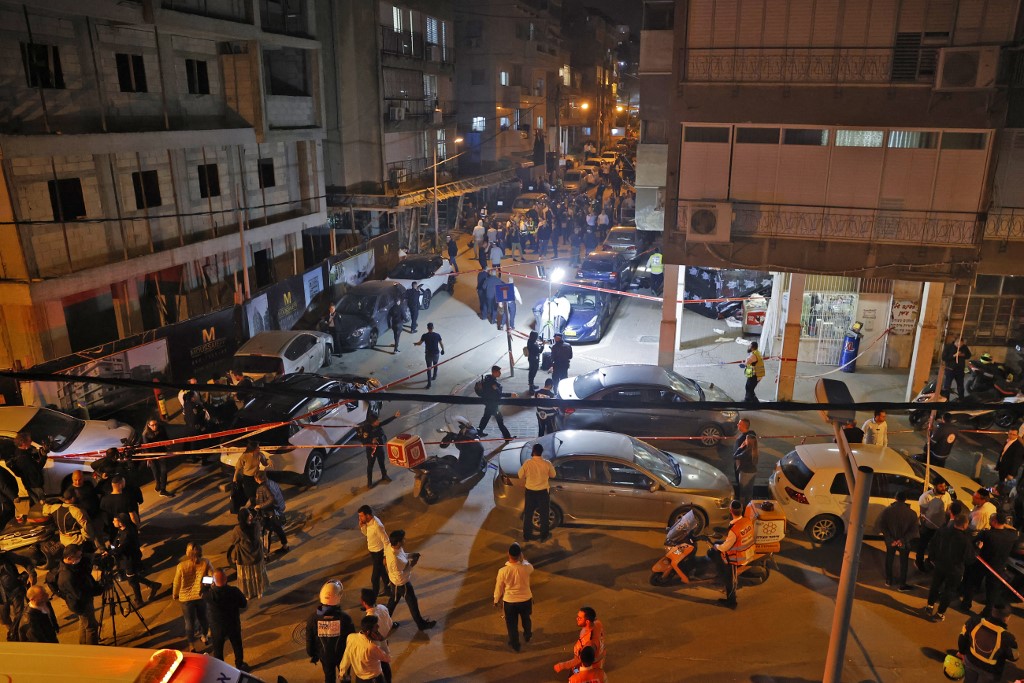 Israeli security forces and emergency personnel at the scene of a terrorist attack on March 28, 2022, in Bnei Brak in which five people were killed. (Jack Guez/AFP)

The raids have concentrated on the increasingly unstable Jenin area, from where several of the attackers hailed.

Israel defends the contentious practice of razing the family homes of terrorists as a deterrent against future assaults, and officials have argued that speed is essential, claiming that the deterrent factor degrades over time.

Over the years, however, a number of Israeli defense officials have questioned the efficacy of the practice, and human rights activists have denounced it as unfair collective punishment.

We’re really pleased that you’ve read X Times of Israel articles in the past month.

That’s why we started the Times of Israel ten years ago – to provide discerning readers like you with must-read coverage of Israel and the Jewish world.

So now we have a request. Unlike other news outlets, we haven’t put up a paywall. But as the journalism we do is costly, we invite readers for whom The Times of Israel has become important to help support our work by joining The Times of Israel Community.

For as little as $6 a month you can help support our quality journalism while enjoying The Times of Israel AD-FREEas well as access exclusive content available only to Times of Israel Community members.

Thank you,
David Horovitz, Founding Editor of The Times of Israel