Apples are a cheap and convenient source of fiber and beneficial antioxidants, plus plant compounds called polyphenols such as quercetin, which has anti-inflammatory properties.

This might explain studies that link regularly eating one apple a day with a reduced risk of heart disease, asthma and type 2 diabetes.

An apple a day can also have ‘a significant preventative effect’ in lung, colorectal and digestive tract cancers, according to a review by Perugia University, Italy, published in 2016 in the journal Public Health Nutrition.

At about 50 calories each, apples may also help with weight loss, partly as the 2.5g fiber in the fruit boosts satiety.

Apples are a cheap and convenient source of fiber and beneficial antioxidants, plus plant compounds called polyphenols such as quercetin, which has anti-inflammatory properties

Scientists at Pennsylvania University in the US found that eating two apples 15 minutes before a meal could cut calorie intake from the meal by 15 per cent (even with the calories in the apples).

To maximize the health benefits, eat the peel, too.

‘Peeling an apple, you lose half the fiber and other important antioxidant plant compounds which are found in and just under the skin,’ says dietitian Dr Sarah Schenker.

Apples also regularly appear in a US annual ‘dirty dozen’ list of foods with the most pesticides, so Dr Schenker says always wash them before eating.

When you bake or stew your apple, some nutrients in it are lost — but other benefits are gained.

‘If you boil fruit you lose the B and C vitamins into the cooking water, but you will still get these nutrients if you consume the cooking liquid,’ says Liangzi Zhang, a nutritional scientist with the Food Databanks National Capability team, a research center funded by the Government. ‘Grilling, roasting, steaming or microwaving generally preserves more nutrients.’

Lightly cooking apples can triple the amount of polyphenols that your body, absorbs according to a study in the Journal of Fruit and Ornamental Plant Research in 2010. Cooking breaks down the cells in the skin, allowing the nutrients trapped in the fibrous peel to escape.

Cooking also helps destroy the enzyme polyphenol oxidase, which reacts with oxygen and makes fresh apples turn brown — a process that depletes polyphenol levels. Stewed apples are easier on the gut, too. They also release a fiber, pectin, that gut bacteria feed on.

Studies, including one published in the American Journal of Clinical Nutrition in 1991, have shown that apple pectin fed to gut bacteria boosted production of short-chain fatty acids, which maintain the gut lining and protect against inflammation even more effectively than oat fibre. 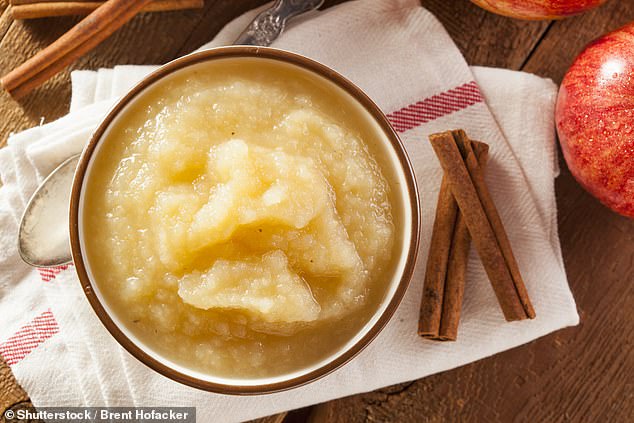 Stewed apples are easier on the gut, too. They also release a fiber, pectin, that gut bacteria feed on

Dried apples contain less vitamin C than fresh but other nutrients, including fiber, are concentrated by the dehydration process.

Studies show these benefits can offset the negative impact of any hike in sugar and calories. In 2011, researchers at the University of Florida, in the US, gave a group of post-menopausal women 75g of dried apple (equivalent to two fresh apples) a day, and another group 100g of prunes.

After six months, the dried apple group had a 23 per cent drop in ‘bad’ LDL cholesterol. The plum eaters did not.

The apple group also had a bigger drop in C-reactive protein, an inflammatory marker associated with cardiovascular disease, possibly due to the polyphenols and fiber dampening inflammation.

Although the dried apple added an extra 240 calories to their daily energy intake, the women in the 12-month study lost an average of 1.4 kg (3 lb), as the fiber may have helped fill them up. 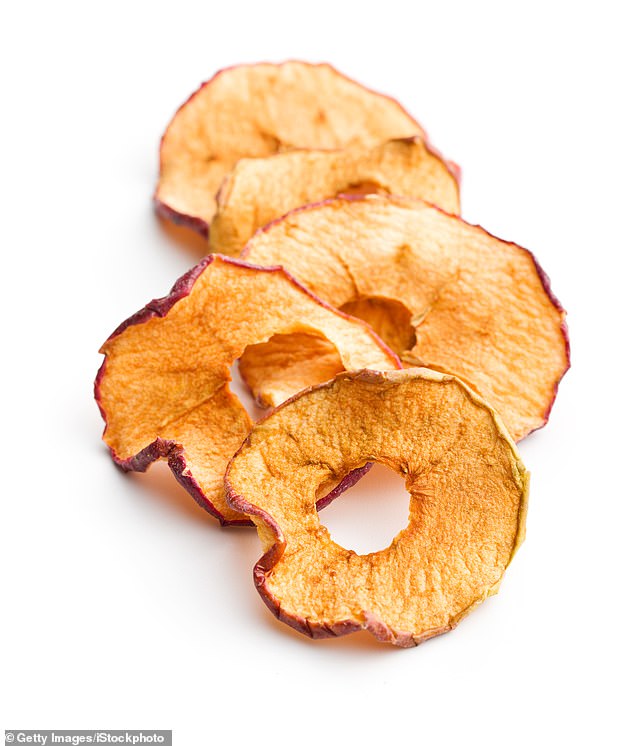 Dried apples contain less vitamin C than fresh but other nutrients, including fibre, are concentrated by the dehydration process

Although a glass of apple juice counts as one of your five-a-day, juicing removes most of the fiber and increases the concentration of sugar, so its glycaemic index (a measure of its impact on blood sugar levels) is about 50, compared with 36 for a whole apple. ‘Juicing destroys the physical structure of the food, so the sugar is digested very fast,’ says Liangzi Zhang.

But Sarah Schenker says the juice is still a useful source of nutrients, with a lower GI than orange juice (59). She suggests choosing cloudy apple juice because it has four times more polyphenols than clear varieties.