June 9, 2022 | The Veterans Subcommittee of the University of Arkansas for Medical Sciences (UAMS) Division for Diversity, Equity and Inclusion hosted a virtual event featuring Saprina Renee Butler, RN, the inventor of the Shoe Slide.

The webinar, “Getting Back Your Stride with the Shoe Slide,” was part of the division’s monthly Veterans Virtual Workshop.

Butler is the assistant nurse manager at the Department of Veterans Affairs’ Fort Roots campus in North Little Rock. She’s a 14-year employee of the VA, and she has spent the past seven years working with inpatients who require physical rehabilitation. This work led Butler to the realization that there had to be a better way to improve the mobility of a patient who is unable to lift a leg after suffering from a stroke and other condition.

The result was the Shoe Slide, a device that attaches to a patient’s shoe and reduces the friction between foot and floor. This allows the patient to move without having to bring that foot off the ground. 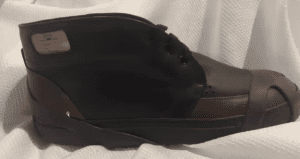 The Shoe Slide is a device that attaches to a shoe, improving the mobility of patients who are unable to lift a leg after suffering from a stroke or other condition.

Butler said the device is low-tech and low-cost, “but that doesn’t mean it isn’t high-impact.”

Butler originally envisioned the Shoe Slide as a solution to problems that arose during pivot transfers. While moving patients, she noticed that those who couldn’t lift one of their feet ended up in an awkward position that raised their risk of knee injuries. Butler couldn’t find a product that would address the issue, so she decided to make her own.

“I walked the aisles of Home Depot, and I was just trying to come up with some kind of spark, looking at different things to figure out what I might need to make this work,” she said.

After three prototypes, the Shoe Slide was born, and Butler found that it did more than solve the problem of transferring patients. “It created an opportunity for patients to ambulate,” she said.

In a video played at the start of the webinar, Butler noted the role that the device can have in raising a patient’s motivation.

“If you’re trying to walk again and you’re constantly stumbling, in your head you’re thinking, ‘I’m not doing it.’ But when we allow for that constant, smooth flow, the patient gets that motivation of ‘I’m walking. I’m doing this.’”

Butler put particular focus on those who are recovering from strokes, the No. 1 cause of mobility problems among the patients she works with. The first three months of recovery are vital, as the brain enters a heightened state of plasticity while it tries to heal itself. Butler believes that getting patients moving earlier in that three-month period could improve outcomes in their rehabilitation.

Butler said she’s found joy in seeing the looks on patients’ faces as they walk again for the first time. “I never knew that when it worked, I would be that emotional,” she said.

The Shoe Slide recently received patent approval after a five-year effort. Butler said she hopes to complete paperwork with the Food and Drug Administration and gain approval to bring the product to market next year. In the meantime, she is getting the device to patients by providing it for free.

The Shoe Slide doesn’t work in all situations, Butler said. Patients with locked ankles can’t shift their weight in a way that allows them to glide across floors.

The Shoe Slide is also limited to indoor use for now. Butler said she has a solution to allow the device to be used on concrete, and she plans to test it once she has the money to do so.

Asked by a viewer about what advice she would offer to fellow inventors, Butler said, “Don’t be afraid to fail.”

Butler added that innovators also shouldn’t be afraid of finding the flaws in their products. “The wrong will make you more successful,” she said.